I am a senior postdoctoral fellow and lecturer at the University of Vienna (Faculty of Social Sciences, department of Political Science). I am interested in vaccination policy and its role in Austrian politics as well as the broader EU context. This website provides regular updates on my research projects. Please get in touch if you are interested in any papers that are regrettably still behind a paywall, or if you are interested in exchanging teaching syllabi! Finally, this website also helps me distinguish myself from my many Doppelgängers out there (not-so-fun fact: I have erroneously received medical results, boarding passes, BBQ invites and casting invitations intended for Doppelgängers).

We have just published a blog post in German discussing early results of our interview study – available here. This forms part of a collection of scientific blog posts hosted by the Vienna Center for Electoral Research in the context of the Austrian Corona Panel Project.

Barbara Prainsack and Katharina Kieslich have developed a project (“SolPan”) exploring the experience of COVID-19 and how and why citizens react in particular ways to current policy measures. Does COVID-19 generate pro-social (solidaristic) behaviour and what does it mean for politicians to instrumentally employ the notion of solidarity? I have just joined a team of researchers on this project and have been conducting online and telephone interviews in this context. Katharina Kieslich and I have also recently written a short blog piece for the University of Vienna, questioning what solidarity could mean under current conditions. You will find more information on SolPan (in German) here.

CfP for a special issue of Science as Culture (SaC)

In recent years public debate has increasingly focused on competing knowledge and non-knowledge claims, their legitimacy and accountability, and the intentional ignorance of fact and evidence. In concerns over “misinformation”, “disinformation” or “fake news”, a cultural narrative pervades that suggests trust in institutions and expertise is at threat, and that illegitimate sources have been elevated. Socio-political instabilities and the rise of populism compound fears of a loss in institutional trust, aided by technological developments and new ways to interact with technology. These fears focus on types of knowledge claims that are intentionally or demonstrably false. Conversely, the mere absence of knowledge or information (rather than falsehood) in policymaking and regulation, has received little attention in political discourse.

In parallel, ignorance and non-knowledge have become the subject of a growing body of research in several disciplines in the social sciences and humanities. The starting point of this scholarship is typically that ignorance is not merely a consequence of our limited capacities as knowers or an innate state of not-yet-knowing (Proctor 2009), nor is ignorance merely an absence of knowledge or a by-product of knowledge practices. Instead, scholars informed by what has become known as “agnotology” (Proctor and Schiebinger 2008) argue that ignorance is structurally and even purposefully produced. This special issue proceeds from this starting point and collects papers that focus on institutionalized forms of ignorance in policy and regulation. Papers are required to articulate conceptions and forms of ignorance along three axes: (i) the strategies of institutionalized ignorance as a part of how institutions operate, depending on the intended goals and agencies of institutions, (ii) what scale of enquiry is taken to view institutional ignorance, and (iii) the stakes that these activities have for public accountability.

We are seeking papers that substantively address institutionalized ignorance, rather than ignorance more generally, as it relates to political processes, policymaking, and regulation. We welcome contributions based on empirical case studies, as well as conceptual papers, but seek to prioritize the former category.

Thanks to my brilliant team colleagues, I truly enjoyed our project workshop this month. The event brought together scholars researching public health and diplomacies in interdisciplinary panels, mingling factions from across the social sciences (political science, international relations, anthropology and STS) and humanities (history of medicine, science and technology). Scholars from the Health work package I lead presented their research in dialogue with other researchers, covering cases such as antimicrobial resistance, vaccination, and diagnostic technologies for newly emerging diseases. The event built on an ongoing collaboration with SONAR GLOBAL, an EU project that mobilizes social sciences against infectious threats and featured a brilliant keynote by Prof Stefan Elbe (University of Sussex).

Serving as a bridge between theory and practice, the workshop was punctuated by a roundtable discussion with Dr Reinhild Strauss of the Austrian Ministry of Labour, Social Affairs, Health, and Consumer Protection and Dr Michaela Told, a global health diplomacy consultant and instructor, as well as InsSciDE’s coordinator and President of the Historical Committee of Inserm (From Science to Health) Pascal Griset. This roundtable particularly helped in identifying changes and continuities in health diplomacy, and also displayed the different temporalities that shape sanitary actions – the comparison between long-term antimicrobial stewardship and short term sanitary measures in the current case of COVID-19 (a new variant of the Corona Virus) was particularly insightful for both academics and practitioners.

Curious about who was there? Click here to view the program.

I am super excited to visit the Tilburg Institute for Law Technology, and Society (TILT) at Tilburg University in March 2020. I will be conducting research for my FWF-funded project KNOW-VACC and working on my habilitation thesis. Ik kijk ernaar uit!

Very excited that our panel has just been accepted for the 4S/EASST conference to take place in Prague in August 2020. Based on ongoing research and working towards a problematisation of dominant concepts of value, Katharina Kieslich (U. of Vienna), Saheli Datta Burton (King’s College), Barbara Prainsack and Gabby Samuels (King’s College) invite both conceptual and empirical papers on the subject of value, and encourage speakers to reflect on the impact of their research on policy and practice. Paper submission opens 16 December!

Along with my wonderful team, I am hosting a workshop (10-11 February 2020) to discuss historical and present efforts to coordinate public health interventions across national and disciplinary borders. The workshop critically engages with a set of case studies on health diplomacy and is funded by the Work Package on Health that I lead in the context of H2020 project InsSciDE – Inventing a shared Science Diplomacy for Europe.

Work Package 5 (Health) will present its case studies in dialogue with other researchers covering cases such as antimicrobial resistance, vaccination, and diagnostic technologies for newly emerging diseases. Specific attention will be devoted to the role of social sciences and humanities in informing infectious disease control, in dialogue with EU projects SONAR GLOBAL and S4D4C. Looking forward to gathering our all-female Work Package team here in Vienna, too!

Barbara Prainsack and the whole CeSCoS team are excited about Nik Rose visiting the department later this year. Prof Rose will give a talk on Wednesday 11 December at 18:00 at the University of Vienna “Aula” on campus. The talk will revolve around the key concept of biopolitics: “The politics of psychiatry today and tomorrow: Is another psychiatric biopolitics possible?“

Together with Christian Haddad at the Austrian Institute of International Affairs (oiip), I organised a visit by Prof. Stefan Elbe (University of Sussex) in Vienna this month.  In his talk on 25 September at the Austrian Institute of International Affairs, Stefan Elbe talked about changing concepts of health and security, the politics of technological innovation, and new forms of diplomacy that (re)shape global health and international relations in the 21st century. A great chance for Anna Pichelstorfer and me to discuss our work on health diplomacy.

The German Ethics Council (Deutscher Ethikrat) is currently considering the ethical dimensions of vaccine mandates in light of decreasing vaccination rates in Germany. To this effect, the Ethics Council consulted three experts on February 21 in Berlin at a public meeting held at the Berlin-Brandenburgische Akademie der Wissenschaften. You can find transcripts and my presentation materials here. 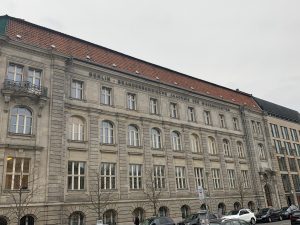 Social scientist, University of Vienna, Dept. of Political Science & CeSCoS. Interested in all matters of health, vaccination, and data politics.

This @TheLancet piece by @richardhorton1 on public trust and perceptions about a vaccine for #COVID19 is a further illustration of how essential research and analysis from #socialscience is to managing and mitigating the #pandemic: https://www.thelancet.com/journals/lancet/article/PIIS0140-6736(20)31636-6/fulltext

What's the impact of the lockdown on Dutch parents? Read our SocArXiv pre-print to see the gendered and classed impact on work location, working time adaptation, division of care and HH work, leisure, WLB, and relationship dynamics: https://osf.io/preprints/socarxiv/uq2pf/. A thread. @UniUtrecht

@Avis At the rental Station in Vienna, Austria. Seven people with confirmed reservations, no cars. Seriously??

#AcademicTwitter I need your help: For junior scholars who get shortlisted for prestigious prizes/awards but end up not making it (e.g. ERC), does your university provide funding so that they can try again? I know some do, but struggle to find written evidence. Thanks so much!